I often joke about preferring the dead to the living, for in many ways they are less complicated. This does not mean I take the lives of those who came before us lightly or that I have not used my fierce researching skills to locate living people. In fact, it is just the opposite. I have such great respect for our ancestors, I have dedicated my life to finding their lost narratives and reclaiming the past.

As with most genealogists, I began researching with my own family. History fascinated me and tying the people in all those #oldphotographs to the time in which they lived was great fun.

When did I become the impassioned (read obsessed) researcher and not just the hobbyist? Take a trip back to college with me. I had spent my first two years at the University of Portland (#gopilots!) in Oregon. Then I attended the University of Northern Colorado for my junior and senior years. There I 'discovered' microfilm. I say that like I was Indian Jones in the Temple of Doom.

Actually, I was in the basement of the James Michner Library (yes, that James Michner) and when I should have been studying for my exams or researching for my many history classes (History of Latin America to 1855, History of Colorado, etc.) I was scrolling through microfilm looking at the census records for Denver in the early 1900s.

Newer model of microfiche reader (I used the crank edition)

You see, I had enrolled that semester in an American Immigration class and coincidentally both my grandmothers, Julia Margaret Szymanski Oletski and Josephine Lucy Purpura Huddleson, were children of immigrants.

I am a Colorado native, 1st generation on my mother's side and 3rd generation on my father's side. These women are my cornerstone. My analytical mind saw so many similarities in the lives of these two very different women ~ separated by sixteen years in age and distinct cultures.

Marianna immigrated from Poland in 1898, at the age of 8 years old, with her mother Kata and her older sister, two older brothers, and a younger sister. They arrived in Galveston, Texas from Bremen, Germany (5,244 miles), heading straight for Denver, Colorado where Frank Tyburska, their husband/father would meet them. Frank had been in the United States since 1892 (although possibly longer) and was working as a coal miner. They settled in Superior, Colorado.

Andrew immigrated from Lubraniec, Poland, at the age of 20, and arrived in Baltimore, Maryland on 30 June 1903. Did I find this information in a passenger list, oh no...instead, my grandmother gave me her father's 1907 Laird & Lee's Diary and Time-saver that both her parents used as a mini time capsule of travels, children, births, illnesses, weather, and even tragedies.

Inside front cover of Andrew Szymanski's 1907 Diary and Time-Saver

So I am fortunate enough to know the migration path and how long it took him to travel across the country from Baltimore, through Pittsburg, Omaha, and Denver, eventually settling in the small but bustling mining town of Superior, Colorado in 1906.

Maria immigrated from Rivinsondoli, L'Aquila Provence, Italy, at the age of 2 with her mother Balbina Trocchio, and her uncle Filippo Trocchio. They arrived on 15 June 1907 at the Port of New York. Their final destination, Newburgh (technically Newburgh Heights as the village was incorporated in 1904), Ohio, which coincidentally is where one of my cousins and her family lived a few years back. They were heading to meet Maria's father Patrizio Spagnolo (or Spagnoli). Patrizio had come to the U.S. in 1900, 1903, and permanently on 4 April 1905 aboard the S. S. Republic heading to Kent, Ohio. Also aboard, Filippo Trocchio, his brother-in-law.

Vito immigrated from Palermo, Sicily, at the age of 22, arriving on 7 January 1920 at the Port of New York. He actually celebrated his birthday while on the ship. His final destination was to his uncle Giuseppe Sansone's home in Cleveland, Ohio, less than 5 miles from where his bride-to-be was living. Vito worked as a barber for over 10 years, then owned a restaurant, before transitioning to a grocery store owner.

Julia and Josephine grew up over 1,300 miles and sixteen years apart and yet ended up living in the same city in the 1960s, where two distinct worlds merged into one.

There are many more similarities in my grandmother's lives, each married at a later age than most; Julia at 26, Josephine at 24. Both saw five children live to adulthood. Jo lost her youngest daughter when she was less than a year old. Both were widowed in their 40s; Julia at 47 and Josephine at 40. Both of them worked outside the home, Julia as a housecleaner and Josephine as a nurse. 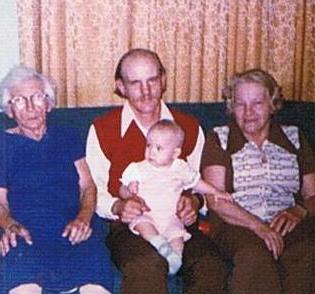 Julia was 64 years old when I was born, her mother Mary, who was 84, was still living in the old house in Superior. I have vague memories of Mary growing up, nothing to concrete as I was only eleven when she passed away. I do, however, remember her house. I remember being told that it was built by my great-grandfather Andrew, who must have been a very short man because all the doorways were so low my dad kept hitting his head. I remember all the nooks and crannies filled with jars and other notions. Mary and Andrew had nine children total that lived in that little house, almost all of them born before the depression. My grandmother told me stories of her and her sister hanging out by the railroad tracks to pick up pieces of coal as they fell off the trains speeding through town. Lesson one, you do what you have to do to survive and keep warm.

Josephine was 46 years old when I was born, her father Vito, who was 76, was still living in Cleveland, Ohio. My memories of Vito are more vivid, even though we lived over 1,300 miles away. We called him GG, short for great-grandpa and he was a source of great stories of my grandmother and her siblings growing up. In 1979, the whole family (most of them anyway) went back to Cleveland to celebrate GG's 80th birthday. It was a time when cousins and second cousins got together to share stories and in my case, play. One of my favorite stories about GG was when my grandmother was chewing gum as a young child and got it stuck in her hair. Now she had been warned about not getting the gum in her hair, but somehow the consequences didn't seem so dire at the time. Well, Vito, the barber then shaved off all of her hair to prove the point that gum did not belong in your hair. She was devastated, she looked like a boy! Well, you can bet that every time we had gum, that story was told. Lesson two, don't doubt the man with the scissors!

I was fortunate enough to have these two women in my life for the time I did. I have favorite memories of both of them that make me laugh and smile and laugh some more. Grandma O called me nosy Rosy because I kept asking questions about everything (read genealogy detective in my future). Grandma Jo traveled the world and brought back trinkets for me to treasure and dream of faraway places. So many stories I have, my goal is to write all of them down so my nieces have a picture of their ancestors that is unique and special. I encourage all of you to capture stories, not just the happy ones, but the sad ones too. Fill your family tree with stories ❤

Tips to Organize Your Genealogy Research in the New Year